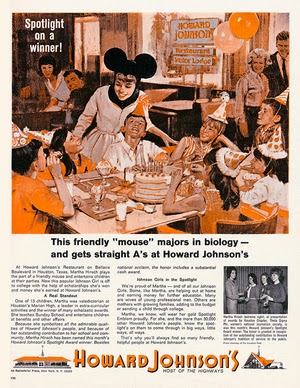 In celebration of 60 years of hospitality, Howard Johnson is launching a nationwide search for former employees who were once the stars of the brand’s 1960’s ad campaign, “Spotlight On You”, with the hope of bringing them into the orange limelight once more.

The iconic Howard Johnson chain is looking back at the milestones throughout the years: from Howard Johnson’s drugstore ice cream counter— with its infamous 28 flavors— to the opening of the restaurant chain, the first hotel in 1954, and ultimately the expansion of the brand internationally, the Howard Johnson brand has become synonymous with Americana.

Through the end of the year, Howard Johnson is searching for the 14 former hotel and restaurant employees featured in the “Spotlight on You” ads. These former associates will receive a free stay at a Howard Johnson hotel, and may also be invited to participate in an upcoming company ad campaign.  For additional information, visit www.hojoadsearch.com.

About Howard Johnson
Part of Wyndham Hotel Group, the Howard Johnson® hotel brand is a global chain of nearly 440 hotels with locations around the world, most of which offer an array of complimentary amenities including free Wi-Fi and free Rise & Dine® continental breakfast. Many properties also offer meeting and fitness facilities, swimming pools and the opportunity to earn and redeem points through Wyndham Rewards®, the brand’s guest loyalty program. Travelers can join the free program at www.wyndhamrewards.com. This year marks the hotel brand’s 60th anniversary.

This looks like a lot of fun.  I wish I lived closer!!

"One of the hidden gems during flotilla weekend is Saturday's Festival in the Park for the children," said Pres Davenport, Chairman of the Holiday Flotilla board.

From 10:00 a.m. to 4:00 p.m., the park is bustling with bouncy houses, slides, climbing walls, the Arab Choo Choo, live blue-grass music, an antique auto show, and, an estimated 100 booths featuring local merchants and arts and crafts vendors. Children will have an opportunity to decorate and submit entries in the flotilla boat-coloring contest, and Home Depot will be on site with wooden boat kits, free for young carpenters. Admission is free for the entire family.
Saturday at 6:00 p.m., a short burst of aerial fireworks will light up the sky announcing the twilight parade of beautifully lit and decorated power and sailing vessels. The flotilla weaves a 4-mile route through Motts Channel, Banks Channel and the Intracoastal Waterway, passing the judges' viewing stand at Blockade Runner, all competing for $10,500 in cash prizes. A panel of judges, including John Boy, of John Boy and Billy's Big Show, carefully select the winners. Text voting continues this year, with the Crowd Favorite and People's Choice Awards determined by spectators.

Immediately following the flotilla, a stunning 21-minute, 4,000-round fireworks display illuminates the night sky, showering the waterway with sound and color. "We have a long show by Zambelli International, one of the most reputable fireworks companies in the world," said Davenport. "We're able to put on a really impressive display that rivals or surpasses most July 4thshows. Most shows are 15 minutes. That additional five to six minutes puts a great cap on the weekend with an impressive fireworks finale."

"Another thing we're really excited about this year is the fact that the Surfrider Foundation has volunteered to help clean up the waterway and beaches the morning after the fireworks show, to make sure the debris is gone and we are good stewards of the environment," said Davenport.