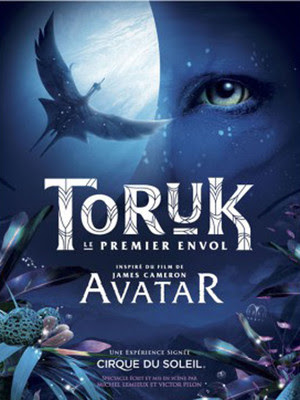 About the show
TORUK – The First Flight is a live immersive multimedia spectacle that brings to the stage the breathtaking world of James Cameron’s AVATAR like you have never seen it before.

Through a riveting fusion of cutting-edge visuals, puppetry and stagecraft buoyed by a soaring cinematic score, Cirque du Soleil applies its unique signature style to James Cameron’s imaginary world and “makes the bond” between two kindred artistic visions that capture the imagination.

Narrated by a “Na’vi Storyteller” and populated by unforgettable characters, TORUK – The First Flight is a mythical tale set thousands of years before the events depicted in the film AVATAR, and before any humans ever set foot on Pandora.

TORUK – The First Flight performs at DCU Center from Friday, December 11 through Sunday, December 13.  Tickets are available at www.cirquedusoleil.com/toruk.